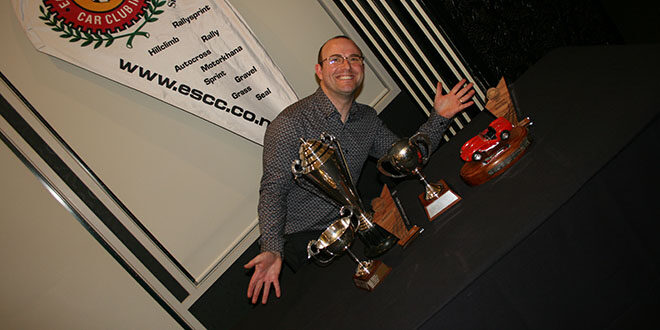 McRae, who had previously taken the championship in 2014, rated it a “pretty good year.” The Invercargill based driver used two cars, both Toyota Corolla’s, in his championship run. He won several trophies and awards along the way including one of the club’s oldest trophies, the Wright Stevenson Challenge Trophy for Motorkhana, the Sealed Events Trophy, the BCM Memorial Trophy for the most consistent competitor and Class B of the Club Championship. “My best success was winning the Motorkhana outright and also winning the Forbes Autocross on grass in the Corolla against the 4-wheel-drive cars. I am rapt to win the championship for a second time. I’m a bit older now and it is nice to know I have still got it. The club is fantastic and I am grateful for all the volunteers and people who run the events. I also want to thank Dad and my brother who prepare the car for every event, I’m only good with cable ties and duct tape!”

McRae’s results gave him the Overall Club Championship with 50 points, heading off last year’s champion Glenn Howden who accumulated 43 points. Howden won the MacManus Cup for Autocross from Roger Laird and Craig Jessop and the ClubSport Championship from Jessop and Laird as well as Class D In the Club Championship to finish runner-up overall. After winning the Club Championship in a $100 Toyota Corolla last year, Howden used a Subaru Legacy this season. “It was a fantastic year. I had great competition with Roger Laird and we became great mates. The sport is a family affair for Howden and he is looking forward to the coming season. My wife Ismay and I will continue in the Subaru while Ismay’s son Konrad and his girlfriend plus our youngest son, 12-year-old Ryan, will run the Corolla. “Ismay and I have a lot of fun helping out with the events as well,” he says.

Last year’s Ladies Champion Ismay Howden was presented with the trophy for Member of the Year. “I am really pleased with the award as there are just so many people in this club who do so much.” Ismay was the Secretary for most of the events and also did timing and results from the club’s van at events, often taking a break to go and compete in Autocross events before returning to her role.

Jane Duthie and her identical twin sons, Alec and Duncan Robbie, attended a Ladies and Youth Promotion held by the Eastern Southland Car Club in 2019 and became involved in ClubSport, sharing a Toyota Corolla in events. Just two years later they were in the spotlight at the prizegiving as Jane won the Ladies Championship and also took Class A in the Club Championship while the Junior ClubSport Championship (Under 18) saw the twins battle right to the end with Alec awarded the Harry Ross Challenge Trophy after he amassed 29 points beating Duncan by just one point with Abby Ward third on 20 points. The last two events were on the same weekend and the twins were tied with one event to go before it was decided in Alec’s favour by three tenths of a second. Alec also picked up the Laird Family Challenge Trophy in winning the Junior Championship (Under 25).

Carter Strang of Wallacetown near Invercargill won several awards – the Gravel Sprint Trophy, the Hillclimb Cup and the Gravel Events Trophy where he took the title with 18 points, one ahead of Gore driver Craig Cormack with Neville Krammer, also of Wallacetown, third on 15 points.

Other awards on the night went to Dave ‘Farmer’ Jenkins who took the Sealed Sprint Cup, Isabella Magee, another of the club’s Under 18 competitors, who won the ESCC Trophy for New Competitor, Craig Jessop, the South Otago Challenge Cup and Adam Kennedy who took the club’s least coveted prize, the Hard Luck Award after severely damaging his BMW at the Club’s Happy Valley event.

Motorsport NZ CEO, Elton Goonan, was at the prizegiving and gave those present a look into his career having competed and worked in motorsport in Europe with a look at how he can bring those experiences into New Zealand motorsport. Afterwards Goonan said, “it was heart-warming coming to the evening and seeing a real true club atmosphere with a focus on grass roots.” He was also pleased that as well as recognising competitors there was recognition for the juniors and ladies in the club, “areas that are particularly important to the sport.”