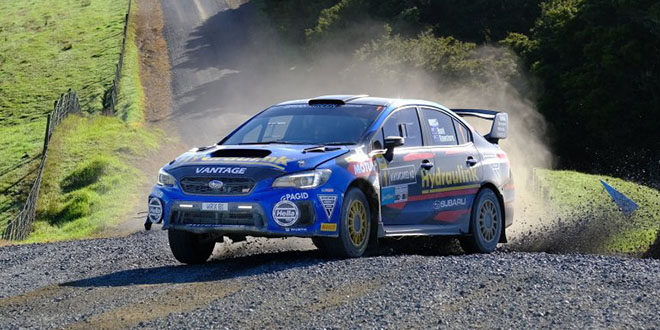 The runner-up result was awarded after organisers decided to cancel the season’s final round in the Bay of Plenty. The government’s decision to continue restrictions on regional travel in and out of Auckland meant about a third of the national championship would be affected if the event went ahead as planned this Sunday.

The current points standings after four rounds therefore determined the placegetters in each championship category.

Hunt collected 84 points over the season to finish behind former WRC driver Hayden Paddon and in front of R5 drivers Auckland’s Raana Horan and Regan Ross, of Kaikoura, who were tied on 61 points. Ross missed out on the podium position due to the count back rules.

After a tough start to the season where he retired near the end of the opening round at Otago, Hunt and Rawstorn bounced back with two consecutive second places. A hard fought fourth at what would become the final round in Hawkes Bay secured the long-term partnership’s second placings on the MotorSport NZ Rally Championship – Driver’s and Co-driver’s points tables.

“This season was obviously shortened but it would have been up there as one of my best. The Subaru ran faultlessly except for the one issue at Otago but every stage before and after that it’s gone perfectly. Tony did a fantastic job as always and we had a ball in the car,” Hunt says.

“Winning the championship in 2019 in my WRX was a highlight but 2021 was a clean season, with no punctures and everything just worked well.”

“Big thanks to Paul, Mike and all the boys at Speedhub, who help out between the rallies and the team that flies into the events. This year has been different with Emma and I having our baby Isadora, as usually I’d be there every time someone was working on the car but there’s been a few instances where I couldn’t make it.”

There’s the family aspect to Hunt’s team as well and he thanked his mum, mother-in-law and wife Emma for making all the meals to feed the team on-event.

“Everyone helps out to make it run like clockwork, especially Dad, who drives the team’s transport truck everywhere. He’s a legend.”

Hunt won his debut championship driving a Subaru Impreza WRX in 2015. Then he took top honours again in 2019 in the production Subaru WRX STI gifted to him by Subaru of New Zealand three years earlier and built into a rally charger by his Hunt Motorsport team.

Subaru of New Zealand Managing Director Wallis Dumper says: “It’s been an absolute pleasure to watch Ben, Tony and their team go from strength to strength with this Subaru. As a company we’ve been proud to have Ben as a brand ambassador and of everything he has achieved over the past five years in his Subaru WRX STI.”

“He has continued an impressive run of results from Subaru rally drivers, dating back to the late, great Possum Bourne, who became our brand’s first NZRC winner in 1991 pedalling a Subaru Legacy.”

Then from 2001, Subaru reigned supreme on the national rally scene, with the marque’s drivers taking home the winners’ trophies through to 2007. Bruce Herbert (Subaru Impreza) was responsible for the 2001 to 2003 victories, before Chris West had his turn in 2004 on-board a Subaru Impreza WRX. Richard Mason took the crown for two consecutive years (2005 and 2006) before Sam Murray secured the title in 2007.

Subaru’s performance model most synonymous with rallying continues to evolve, and Subaru Corporation has recently unveiled the United States model of the all-new 2022 Subaru WRX. Powered by a 2.4-litre direct injection Subaru Boxer turbo engine, news around its arrival timings in New Zealand is eagerly anticipated by Kiwi Subaru enthusiasts.