Both the Hamilton businessmen were head over heels – almost literally in Stage 8 – as they got their first competitive opportunity to experience the performance and potential of Chassis #46 of the M-Sport factory’s latest rally creations.

Their Ford Fiesta R5 MkII is M-Sport’s current weapon of choice in the second tier of the World Rally Championship (WRC2) and proved to be everything Todd and Barge hoped it would be as they blasted through the 14 rollercoaster stages north and then south-west of Dunedin.

“We went to Otago with a number of goals in mind,” said Todd. “First and most important was to finish and thereby gain as much seat-time as possible to learn how the car works and try to get somewhere close to getting the best out of it.”

“Next was for Barge and I to get in sync and up to speed again in the car [with the pace note calling], particularly as everything happens so much faster now. And with all the COVID lockdowns, it was almost nine months since we last did a rally.”

“Then of course it was vital for our awesome Service Crew to get their first real chance to work on a state-of-the-art car that’s brand new to them, and in the pressure cooker situation

that inherently comes with time-constrained servicing,” said Barge. “But as we knew they would, everyone stepped up and we couldn’t have asked for more from them all.”

Todd commented, “By achieving all that, we got our [NZRC] championship campaign off to a solid start as well as the bonus of scoring well in the first of the two APRC Qualifier (the FIA Asia Pacific Rally Championship) rounds for the Final in Australia in November.”

The ONLINE CONTRACTORS Fiesta flew through the 14 stages and recorded Top Ten fastest times on all but one of them – one of only 3 crews in the 98 car field to do so.

Rally Otago is the fastest NZRC round, this year with an Average Speed for the 250 kilometres of almost 120kph, with some Top Speeds in excess of 200kph. Their Fiesta (Regn FORDR5) hit ‘only’ 187kph.

“The Fiesta isn’t designed or set up for outright top speeds,” said Barge. “It’s pace and performance comes through its handling, traction and corner speed, as evidenced by those two x 3rd fastest times coming on stages that had slower average speeds than most of the others..”

“So having used Otago as a prolonged high speed test session and familiarisation run for everyone, we are really looking forward to [the International Rally of] Whangarei this weekend [May 13 – 15],” said Todd.

“We’ve recently had the chance to do some more testing and have made some significant gains in improving the setup and handling which has given us a big boost in confidence.

“Most of the stages are also being run in the reverse direction this year and therefore  previous knowledge might not be such an advantage to those crews who have done Whangarei for the last few years.

“So it will be awesome to let the car loose on the roads up north, with all the camber, and, as it’s the round with the lowest average speed [98kph], it will be very interesting to see how well we can go on those more technical stages,” he concluded.

Rally Otago Results and Series Points, along with comprehensive LIVE Results for Whangarei are available on www.chrissport.co.nz or by scanning their QRCode below:

TEAM ONLINE RACING would like to thank ONLINE CONTRACTORS, WINGER MOTORS, SALSA BAR AND GRILL PORT DOUGLAS and SRS HAMILTON for their ongoing support in making this project possible. 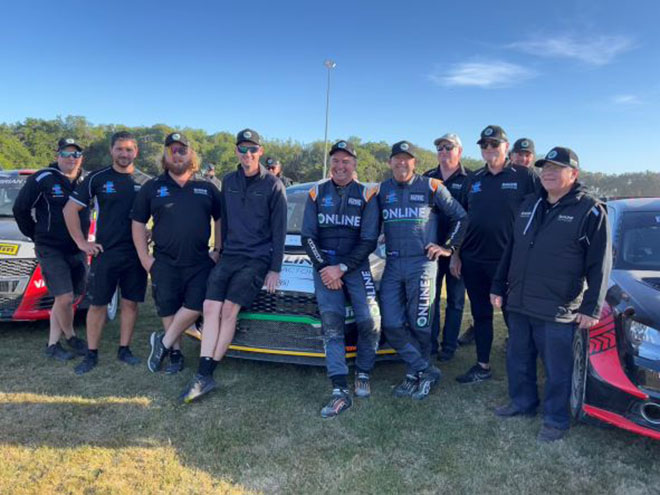