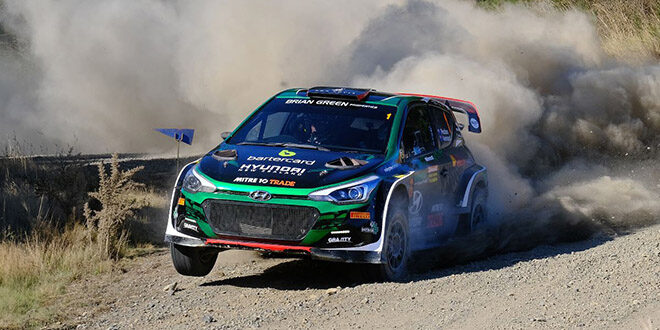 Hayden Paddon completed a dominant victory at the Otago Rally in the opening event of the Brian Green Property Group New Zealand Rally Championship on Sunday.

The WRC rally winner took a clean sweep of stage wins on Sunday in his Hyundai New Zealand i20 AP4 car to a comfortable win over Ben Hunt.

Hunt impressed as he debuted the Skoda New Zealand Fabia for the first time and will feel he has a lot to build from with the new car.

Raana Horan completed the podium in the Generator Rental Services Skoda Fabia R5 after a sensible and measured drive across the weekend.

Dylan Thomson put together a dominant day to be first overall 2WD in his Group N Ford Fiesta while he also took out his class ahead of youngster Bryn Jones (Ford Fiesta) and the experienced Charlie Evans (Honda Civic).

John Silcock (Mazda RX7) was second overall in 2WD – 14.4 seconds behind Thomson with Shane Murland (Ford Escort) over a minute back in third.

Silcock led Murland home in the Historic 2WD battle while reigning champion Anthony Jones was third in his Ford Escort.

Daniel Haines made a terrific debut in the Open 2WD class, claiming the victory in his Ford Escort. He led home Brent Taylor in the Toyota FT86 and Chris Alexander in the Toyota Corolla.

The championship moves north for round two with the International Rally of Whangarei set to run on May 13-15.