With Mamaku Rally approaching on the 8th July and a Motorsport NZ Rules Change, we had some work to do to be ready.   The main rule change was for the safety clothing advising that all drivers and co-drivers now had to wear a multi-layer suit or a single-layer suit worn in combination with the appropriate safety underwear.

So with our new underwear ordered, it was time to think about the car.  I knew from our last outing that the car had some flat spots in the power range.   They were probably not noticeable on a track, but on gravel I was finding it difficult to maintain control in the faster corners.

After a chat with Dave at PF Automotive, and a look at the spec of my camshaft, we decided to take the cam out and grind it down to move the power/torque range.  We also decided to have an intercom fitted so we could try pace/safety notes for the first time, and I splashed out on new tyres.

I also decided to change the sign writing on the car a little and start making the car mine.  We added the www address for this website along the bottom of the doors and on the rear windscreen.  We also added it to the rollcage above the windscreen in the hope that my new “in-car camera” would arrive in time.

Friday 6th July
I got the call from PF Automotive that the car was ready for collection late afternoon.   I arranged to leave work a little early so I could collect the car before they closed.   On arrival, Dave took me for a spin in the car to see how much of a difference the new cam had made.   Wow – I was impressed!  The power was sharper than ever, and the car felt more driveable.  The car had dynoed at 160bhp at the rear wheels – happy with that!

Got home late to find my new GoPro Motorsports had arrived – just in time – things were dropping into place and I was pretty sure we were all set for Sundays event. 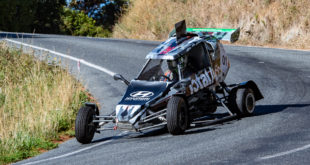