Throughout the season, van Klink had set the pace and looked set to secure the title with a round to spare before a burst appendix saw him forced to sit out the penultimate round on the Coromandel Peninsula and consequently seeing his lead reduced to zero, forcing a winner takes all shootout.

Wet conditions greeted the teams and van Klink posted what he thought was a strong opening time in the Triple Rotor Mazda RX-8, only to find championship rival Anthony Jones set a time 15 seconds faster. In fact it would be the fourth stage before van Klink and Dave Neill could take a stage win away from their rivals, taking the seventh fastest outright stage time and quickest two-wheel drive through the 42 kilometre monster, reducing the deficit from 26.2 seconds to 7.2 seconds.

The penultimate stage saw the gap open to nine seconds but with the final stage of the rally the longest at 43km, there was plenty to play for. After charging through the final stage van Klink set the fastest two-wheel drive time and seventh quickest overall, only to find his rival suffered a mechanical issue, meaning he not only won the rally but the overall two-wheel drive title as well.

“That was certainly doing it the hard way! It was always going to be hard to beat Jonesy at Waitomo, it doesn’t necessarily suit our car, so while we were gutted for him, it was a relief to get to the finish in the lead,” said van Klink. “It was an exciting way to finish what’s been a pretty exciting season for us and a great result for the team and sponsors.

Klink Rallysport would like to thank the sponsors that have made their 2019 NZRC campaign possible; Universal Plumbing, Buteline, Entire Electrical Solutions, Palmside, Al Marsh Rotorsport and Castrol. 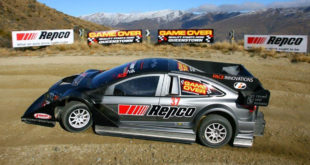